PROJECT • Teaching about the Courts 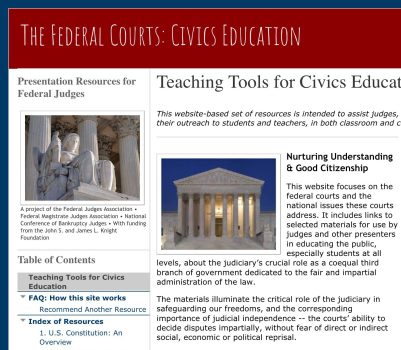 The Federal Courts website focuses on the U.S. federal courts and the national issues these courts address. It includes links to selected materials for use by judges and other presenters in educating the public, especially students at all levels, about the judiciary’s crucial role as a coequal third branch of government dedicated to the fair and impartial administration of the law.

The materials illuminate the critical role of the judiciary in safeguarding American freedoms, and the corresponding importance of judicial independence — the courts’ ability to decide disputes impartially, without fear of direct or indirect social, economic or political reprisal.

The website-based set of resources is intended to assist judges, members of the federal court system, educators and others in their outreach to students and teachers, in both classroom and courtroom presentations.

Focus on Critical Topics:  This web-based set of resources features the following topics: